On one of my last days in London, I woke up with no plan. I had seen all of the touristy attractions, I’d inhaled way too many plates of fish and chips, and I’d walked until my feet felt like they were going to fall off. So, I pulled out my phone while still in bed and typed in “things to do today in London” . . . and was genuinely surprised with how much popped up.

There were last-minute tickets to plays, museum passes, happy hours . . . they all sounded great, but I was looking for something that wouldn’t exactly break the bank (a.k.a free).

I ended up finding a pop-up exhibit in Somerset House that focused around the art of journaling. Seemed interesting enough. So I got dressed, stopped by a Pret A Manger for some English Breakfast, and hopped on the Tube. Somerset House is huge, so when I finally found the exhibit somewhere around the East Wing, two blonde girls with strong British accents greeted me. They told me the best way to make it through the “horseshoe-shaped” exhibit, but I was pretty much free to wander wherever I pleased.

Of course, there were diaries everywhere. Some had been donated, others found. A few were pre World War I, some were dated within the last 10 years. An anonymous woman kept a journal of each book she read. There was a journal about food, another ledger was filled with carefully handwritten numbers. There were children’s dairies, bullet journals, diary/sketchbook hybrids . . . if  someone thought it was worth the time to write down, it was there.

Sometimes it was hard to decipher some of the handwriting but, if you were to ever look at my personal notes, you’d think that they look like gibberish anyway. Diaries aren’t really meant to be read by foreign eyes.

Not all of the journals were kept on pen and paper. There were a few video dairies of people reading pivotal moments from the journals they kept in their younger years. And when I say “pivotal,” I mean: “Chase looked at me today in homeroom while Mrs. Smith was talking about Venus. We’re probably going to get married one day.” One girl even made a pros and cons lists about her fifth grade crush: “Pro, he has a cute dog. Con, he doesn’t bring the dog to school.” Even at ten years old, she knew what really counted.

Some were funny, some were sad. Towards the end, there was the dairy of an artist who ultimately committed suicide after suffering from stomach cancer for many years. His last entry was on the day he died, before, and after, he swallowed a bottle of pills. He described his pain, his choice, and the last conversation he had with a friend. The words trailed off mid sentence as his steady handwriting became slowly illegible.

I’m no stranger to a diary, but I never thought I was any good at it. I go through more notebooks than I do dairies. They’re not dated and they’re filled with strange scribbles that usually have no context. I just kind of write when I want, where I want – which, isn’t great for my organization. But I do try to keep a smaller, actual journal for real dairy purposes that I’ll turn to every now and then when the notebooks just won’t cut it.

Journal me and writer me are the same person, but not really.

My writing stye is different. When I write creatively, I have a purpose, an end goal, a story to tell. Sometimes they’re my views, sometimes they aren’t. I write more for the art rather than to convey personal opinions. However, I won’t shy away when they coincide; writing about what your passionate about is great inspiration. But usually they don’t go together.

In turn, journaling helps my creative work. If I’m struggling on plot or a specific scene, I’ll journal until all the thoughts bouncing around in my head have somewhere to go – even if they have nothing to do with what I was trying to write about. However, by clearing my mind, I’m inadvertently working on whatever problem in my writing that had me stumped, and then it’ll hit me like an epiphany when really, I just took a step back and let time sort it out.

Sometimes I open old journals and cringe. Actually, most of the time I read back on what I’ve written, I cringe. (There’s a very bad period/Goonies inspired manuscript written by middle school me floating around the house somewhere.) Once, I relived some of teenage Haley’s woeful tales with a bottle of wine – I ended up finishing that before making it more than halfway through the dairy.

My college journal isn’t much better. It’s all about which boy I was obsessed with from the result of continuous unrequited love (that was never really love), how I thought I was going to fail creative writing because I let my ego get in the way, paragraphs upon paragraphs of what I thought was the meaning of my life, and fights that ended up in lost friendships.

But all of it worked out in the end. And, if it didn’t, it was for the best.

After finishing the diary exhibit in London, I felt inspired to create a new one. I love the feeling of buying a new journal. All those blank pages – it’s an invitation to start over, like there are no longer any past events to influence future ones. It’s a clean slate for more adventure. I definitely wasn’t the mousy tattletale in grade school anymore, nor was I the college girl battling anxiety attacks. Traveling had created a while new young woman who deserved her own journal.

A few hours later I ended up in the Waterstones near the British Museum, where I found my current journal. I don’t write everyday because, if I did, it wouldn’t be a very interesting journal. Truthfully, life can be boring when looked at on a day to day basis, unless I spent the rest of my time backpacking (which does seem like a very intriguing offer). I’ve learned that you don’t have to be good at journaling to journal. In reality, is anyone even good at it? What qualifies someone as a better diarist than yourself?

Despite popular opinion, I like reading back on old stuff and cringing. It means that not only has my life changed, but that I’ve changed (as a writer and as myself) and, if what I remember about teenage Haley is of any reassurance, I’m so glad I’m not her anymore. Only, if i’ve learned anything from journaling, it’s that life is one finicky little thing. You put so much effort into it, and it kind of just does whatever it wants. No matter how many plans you make, it’s probably never going to work out in the way you originally intended.

And that’s not necessarily a bad thing. 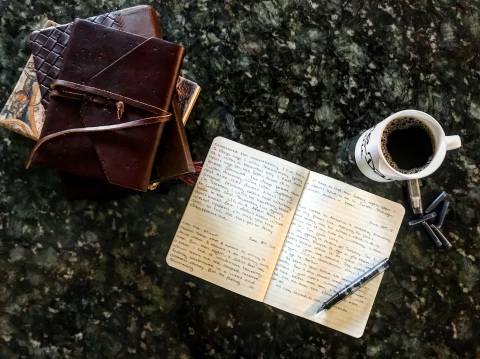 Do you journal? If you do, why? If you don’t, would you ever consider?

2 thoughts on “Do You Even Journal?”